Hormonal Health - Revealing the Secrets of the Endocrine System 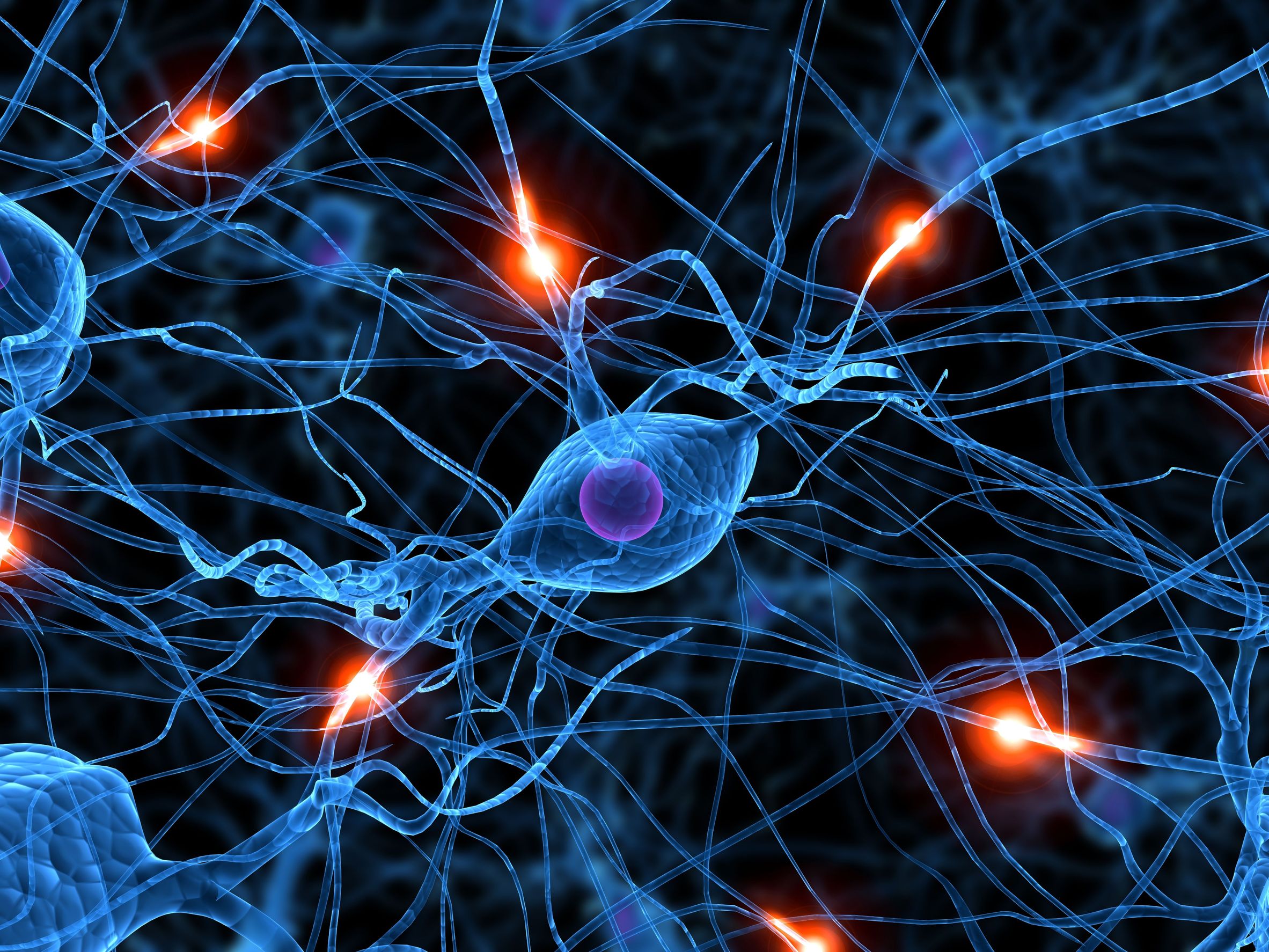 Shining the Light on the Forgotten System

It’s not usually a topic of conversation around the dinner table or something you’d choose to read up on, as most people would consider the functioning of the endocrine system to be a tad dry. Yet, understanding the basics of this vital and fascinating system of the body can make a huge difference to your life.
Our endocrine glands can impact every area of our health. The endocrine system is made up of glands that produce and secrete hormones. It is responsible for the hormonal functions in the body, with the 30 hormones produced each having a very specific job to do. We all know the impact of whacky hormones, and it’s fair to say, it’s not good!
If one gland’s function is out of balance, it can affect the health of all the others, and the glands affect the function of the entire body. Not only does the endocrine system work on the physical realm, but also on the emotional and energetic realms. It is highly beneficial and empowering to understand how we can nurture our own bodies and support the optimal functioning of these glands.
With a few simple tricks, you can easily keep your body in tune and enjoy greater happiness and balance.

A Basic Guide to The Endocrine System

The endocrine system is a major, yet sometimes overlooked, component of your body. While it has many physical functions, such as regulating sleep, heart rate, metabolism, the immune system, and so much more, it is vital to mental functionality and mood. 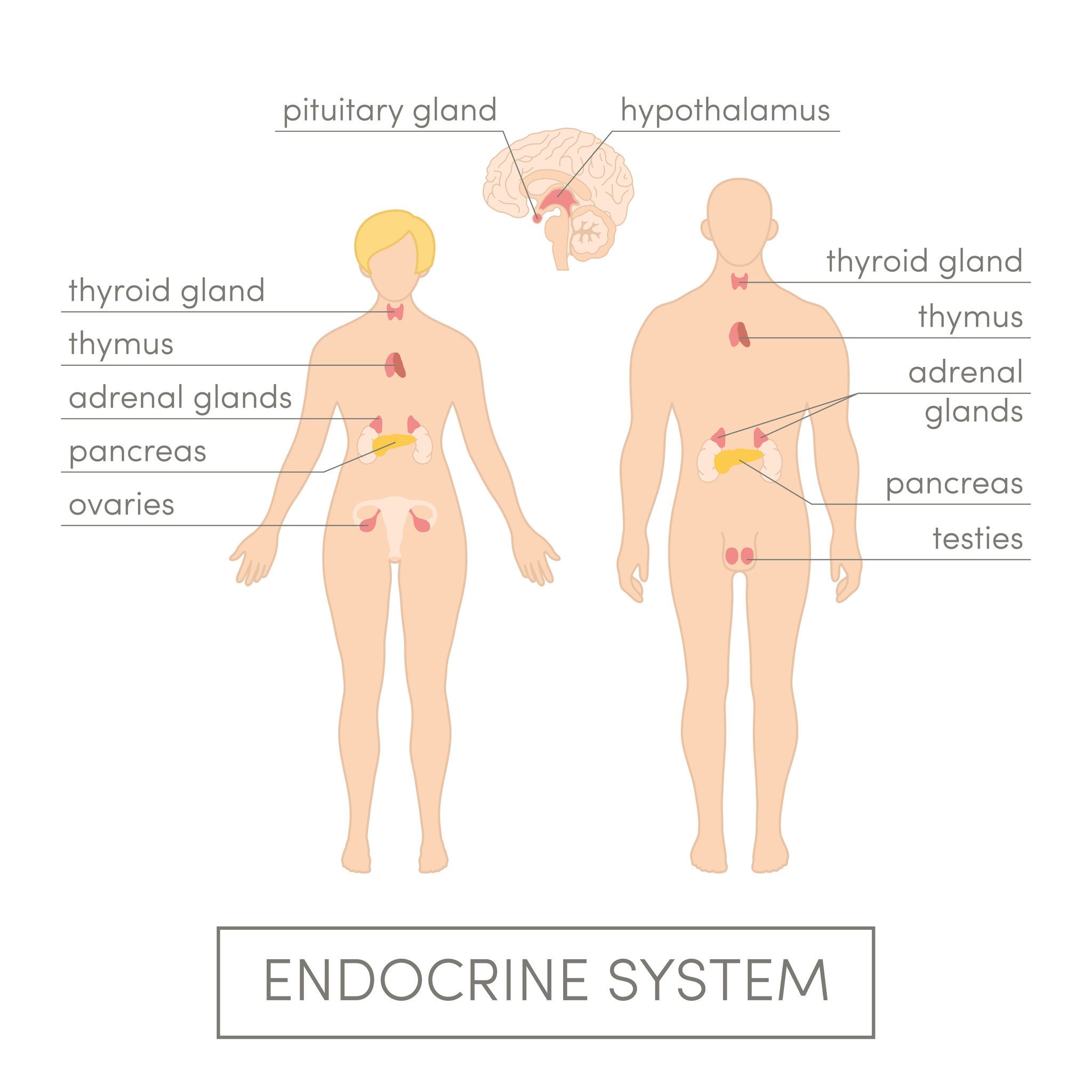 The human Endocrine system plays a major role in our health and wellbeing.

Looking at the important gland centres of the body – the hypothalamus, the pituitary, thyroid, parathyroid, the adrenals, pancreas, pineal gland, ovaries and testes – we begin to understand why this system is so important. But the liver, pancreas, stomach, small intestine, kidneys, and the placenta are all also part of the endocrine system. So if you’re feeling a little down, touchy, or just plain grouchy, perhaps your endocrine system is suffering.
Together, the hypothalamus and the pituitary regulate all processes related to survival in general, such as hunger, thirst, sexual activity, body temperature, stress, and fight or flight. The hypothalamus tells the pituitary what to do, and then the pituitary tells the other endocrine organs what to do. You can imagine it like a control centre with a chain of command and if anything falls apart in this chain of command, the body’s balance can go awry. The endocrine organ hormones feed back to the hypothalamus, telling it when to turn on or off. The hypothalamus is the go-between of the endocrine system, nervous system, and the immune system. There is a powerful relationship between the endocrine system and the central nervous system and the two systems are synergistic. Most illness is caused by imbalance and stress, and we all know that if your nervous system is optimal you will deal with stress better, and have optimum wellbeing.
The hormone secretions are a language; a dance, that keeps us energetically stable, balanced and feeling supported. When it is not in equilibrium we feel tired, heavy and unsupported. Stress plays a big part in destabilising our endocrine function and, consequently, our nervous system too.

Chinese Medicine and The Endocrine System

In Traditional Chinese Medicine (TCM), the endocrine system is closely tied to the internal balance of Yin and Yang energies in the body. Although imbalance between the Yin and Yang energy is the basis of any human disease, the most important element for endocrine disorder treatment is centered on the kidney meridian 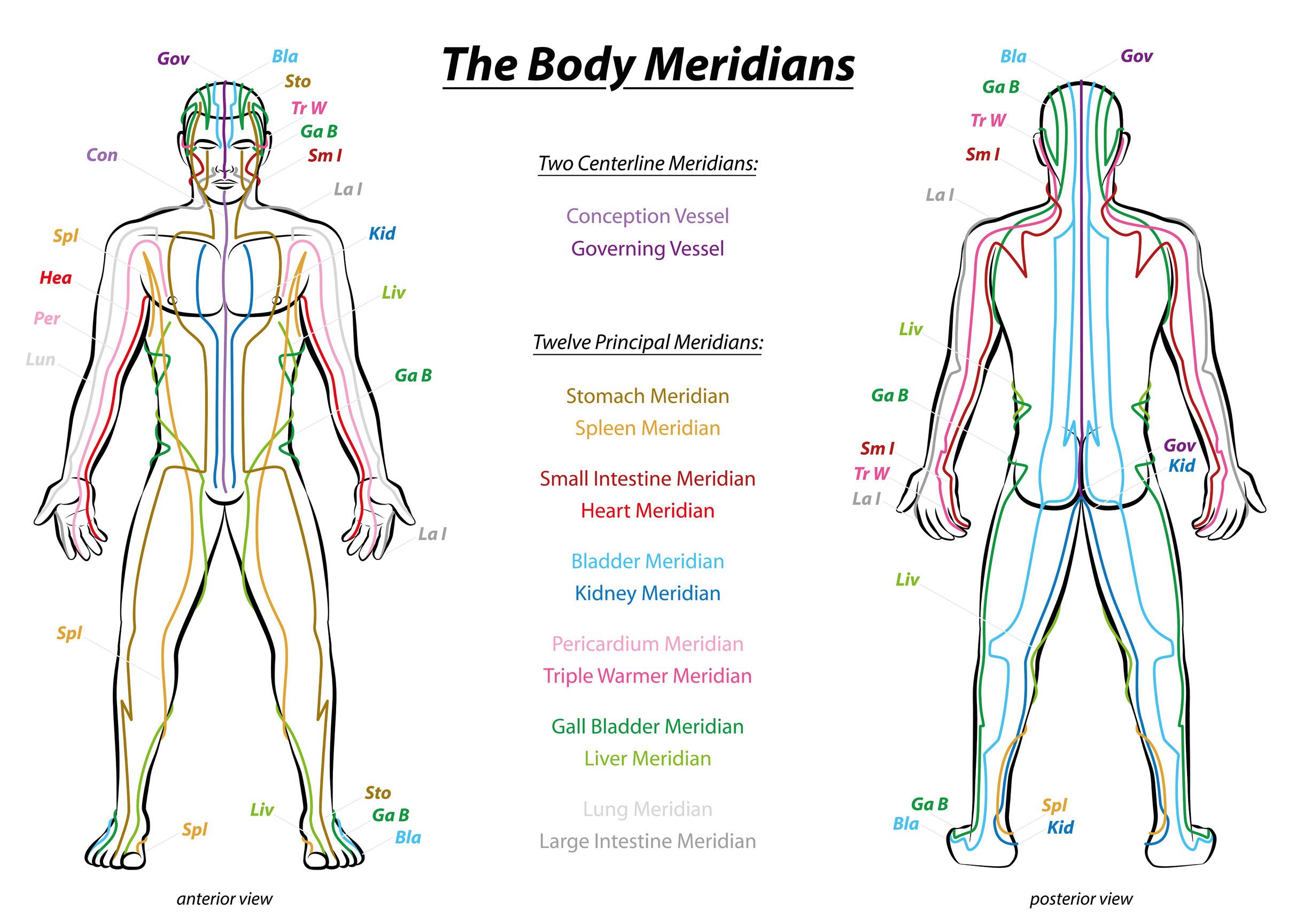 Meridians are channels of energy that run throughout our bodies.

Western physiology and anatomy limits its description of the kidney to the actual organ itself, while TCM assigns it major significance with the ‘kidney’ as the home of the ‘ancestral chi’ (inherent constitution) and the root of yin and yang for the entire body. TCM also recognises the prominent hormone regulating role played by the adrenals, which are two endocrine glands attached to the superior surface of the kidneys, and just how important they are in the regulation of the autonomic nervous system.
The kidney meridian is known as the root of life and the reservoir of energy; the seat of courage and willpower.

The Chakras and The Endocrine System

The ancient Greek philosopher, Plato, saw the spinal energy centres, or chakras, as being the subtle organs of the soul in establishing dominion over the mind and body. Plato said that the soul manifested in three forms.
The highest level of soul expression he called the logos, psyche or immortal soul. It’s found in the eyebrow centre and associated with the endocrine gland, the pituitary and Hypothalamus or master gland of the endocrine system. He called the middle level of soul expression thymos, the mortal soul, the aspect that is in charge of the body and its vital expression, and its associated endocrine gland is the thymus gland. The third or lowest level epithymia
, is concerned with our basic survival instincts and is at the root centre, associated with the endocrine glands, the adrenals. So embedded in the chakra system is the endocrine glands, with perhaps the most important endocrine glands – the adrenals – and the base chakra forming the basic energetic support or foundation for the entire organism.
Hermeticists and other esoteric philosophers noticed that every chakra is linked to an endocrine gland: the crown chakra with the pineal, the brow centre with the pituitary and hypothalamus, the throat centre with the thyroid gland, the heart centre with the thymus gland, solar plexus with pancreas, sacral chakra with the reproductive organs and the base chakra with adrenals. 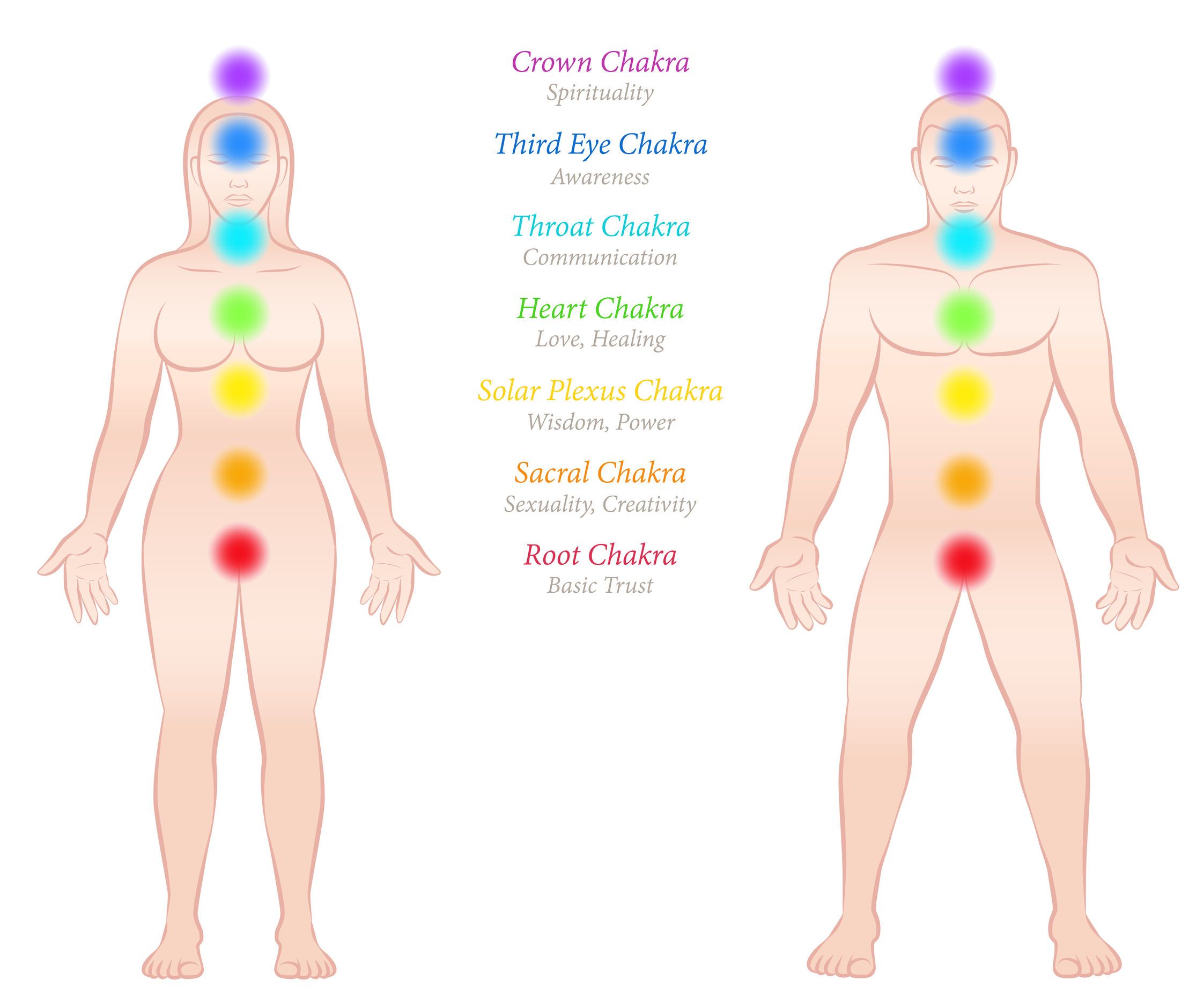 The chakras are said to correlate with the different glands of the endocrine system.

They then reasoned that the function of the associated endocrine gland must have something to do with the spiritual, psychological, psychosomatic and physiological functions attributed to the chakra, or energy center.

Stress, infection and inflammation, sleep, exercise and diet – especially minerals and fluid balance – all have an impact on hormone levels. Synthetic organic chemicals have a negative impact on the human endocrine system and they place stress on human reproduction, growth and/or development.
The endocrine disruptors mimic or block hormones and disrupt the way the body normally works through the functional impairment of the endocrine glands.
Typical symptoms of the endocrine disorders include low immunity, fatigue, weight gain, depression, digestive issues, hair loss, arthritis, and feeling chilled regardless of the temperature.

The entire endocrine system works together to control the level of hormones circulating throughout your body, and if one or more hormones are even slightly imbalanced, it can cause widespread and major health problems. 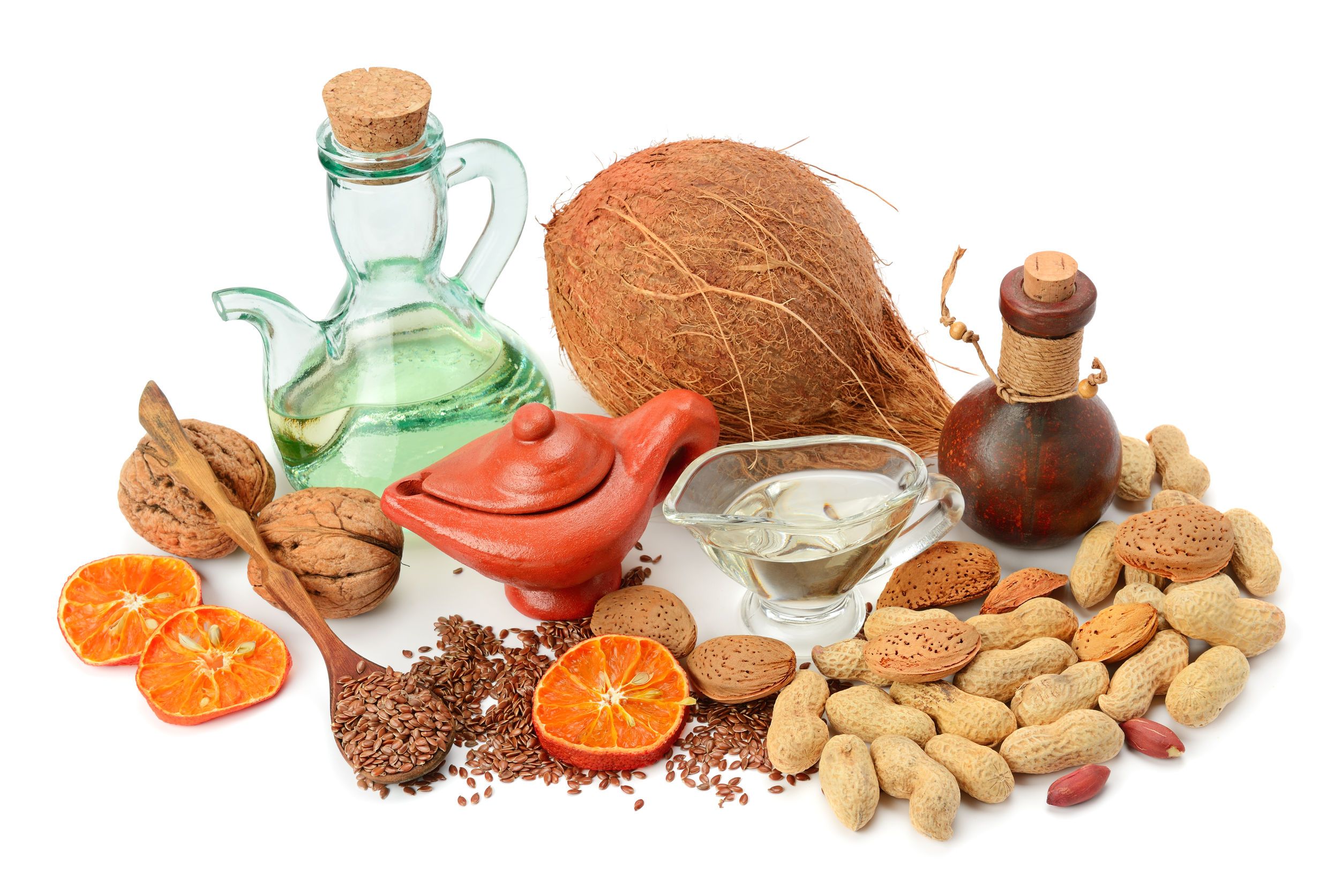 There are some simple ways we can balance our hormones naturally. Eating healthy fats, like coconut oil and avocados, go a long way to supporting hormonal balance. Supplementing your diet with adaptogen herbs – a unique class of healing plants that promote hormone balance, boost immune function and protect the body from diseases, especially those caused by excess stress – such as Ashwagandha, medicinal mushrooms, Rhodiola and Holy Basil, can have a powerful effect on the body. Dairy is a big no-no for taking care of your hormones because dairy contains numerous natural hormones that weren’t meant to be combined with our own.
Reducing the impact of chemicals on the body, by eating wholesome natural food, and eliminating toxic kitchen, beauty and body care products go a long way to supporting hormonal health.
Of course, exercise is vital for hormonal balance too. For people with hormonal imbalances, the key with exercise is to be careful not to overdo it. Reducing stress and ensuring you get enough sleep are vital to happy hormones. Cortisol, the primary ‘stress hormone’, is regulated at midnight. So people who go to bed late never truly get a break from their sympathetic flight/fight stress response.

Yoga is one of the best ways to balance the endocrine system. Practices like Yoga Nidra or yogic sleep, are a great way to control stress and emotion through encouraging the autonomic nervous system and the digest, rest response which is so nourishing to our entire system. Yogic breathing supports the hypothalamus and other glands, helping to balance the endocrine system. And of course, yoga asana (or poses) have a direct action on the endocrine organs, through twists, inversions and other poses which massage and stimulate the organs such as the kidneys, liver and pancreas, encouraging hormone production and flow. The chakras and endocrine glands align and communicate in important ways, and by practising yoga we can support greater hormonal balance through harmonised chakras. 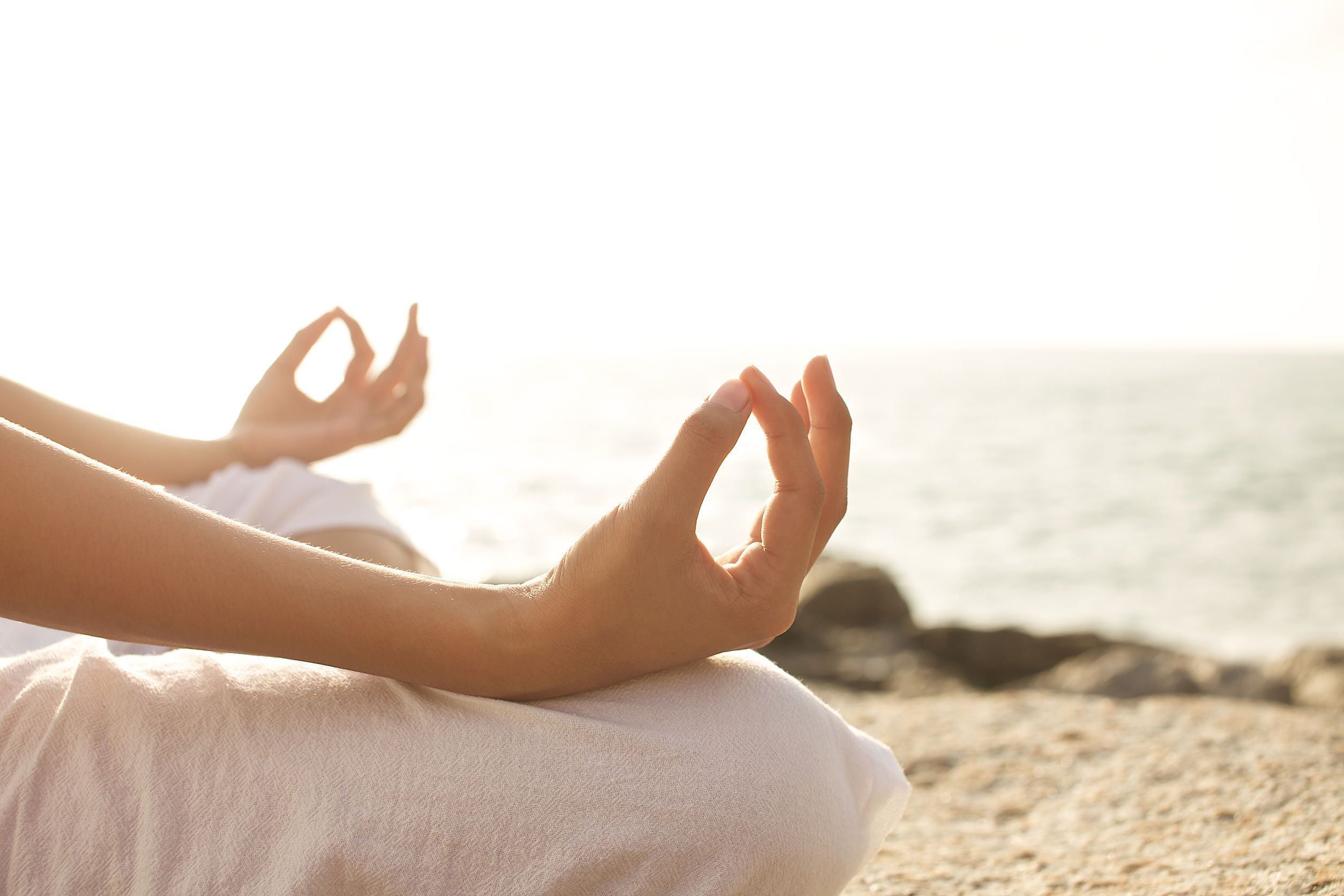 The endocrine network ‘talks’ to the other systems within the body to control everything from growth and development to how energetic a person feels. It controls the process of hormonal balance, special chemicals produced, stored, and distributed by glands and organs within the body.
Many yoga poses stimulate and/or activate certain glands and organs, maintaining hormone balance and consistent production and distribution. Specific yoga poses include all twists, rabbit pose, forward bends and shoulder stand.
We can easily improve our health and vitality by taking care of this amazing regulatory system of the body, the endocrine system. When our hormones are balanced we feel happy and able to go out into the world and live our purpose with enthusiasm and joy. Our relationships are improved and life flows.

Service/Support provided by Dr. Shikha’s NutriHealth Team organicindiaclean@nutrihealthsystems.com
Have Questions? Click here to get them answered!